Our newsletter is a great place to stay updated on projects, events, and news from the community. Want to get this delivered straight to your inbox? 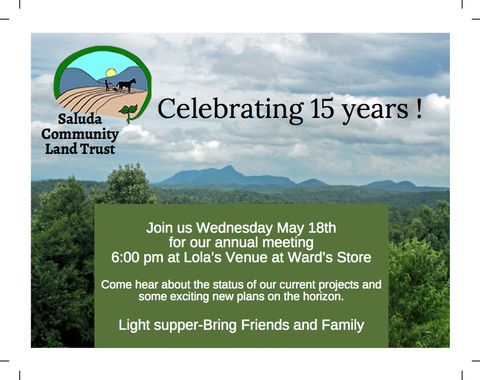 Yahoo! This is Your Celebration

We're going to celebrate SCLT and its accomplishments since Covid-19 interrupted our party plans for the last two years!.

A celebration to last throughout the years

So bring your good times and your laughter too

We gonna celebrate our party with you

Let's all celebrate and have a good time

We gonna celebrate and have a good time!

Thanks to Kool & The Gang

Bring clippers if you have them and dress warmly.

Directions to Twin Lakes: from Saluda go out Greenville Street 1.7 miles. On left will be Linda Lane and a Twin Lakes sign. Go .2 miles down Linda Lane to the entrance of Twin Lakes. 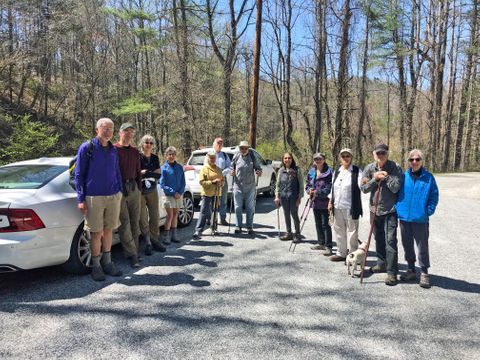 WALKS IN THE WOODS

May 1 Pacolet River Wildflower Walk Walkers will be led down a privately owned path to the Pacolet River. This higher elevation start should still have the earlier ephemeral wildflowers in bloom.

May 15 Ollie's Falls This is a moderate out and back walk on a well-maintained trail along Joel's Creek, passing four waterfalls. There is an optional, steep, side spur which goes down to Turtle Falls.

June 5 Blake's Peak We'll leave from the Saluda Library parking lot and walk to the top of BLake's Peak and back, using as few paved roads in route as possible. Blake's Peak is steep, but worth the climb..

Walkers meet at the parking lot of the Saluda Library at 2pm. A SCLT member will keep you aware of the terrain of the trail and share their insights about the history, flora, and fauna of the area.

Prepare for each walk with comfortable shoes, a walking stick, water, and a snack. Feel free to bring your field guides and a camera. Please provide any pertinent medical history to your guide. Many of these hikes will access private property. SCLT has obtained the owners' permission to allow you to access these areas that are normally not available to the public.

Call ahead to determine whether the hike will welcome four-footed companions. 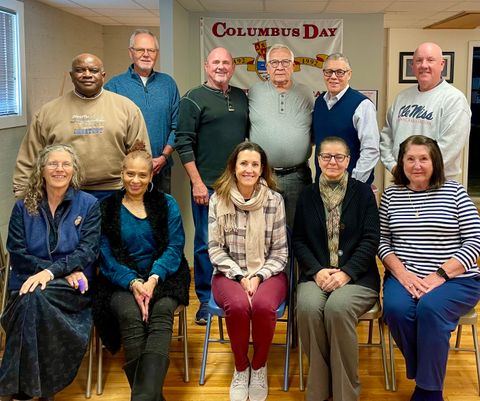 The Chocolate Drop Mountain Development (on Foster Mountain) off Houston Road in Columbus has been a frequent, and sometimes heated, topic of discussion since 2007 when the mountain was cleared by a developer for a subdivision, causing catastrophic erosion problems. As a result, property owners found themselves owning land that was unsuitable for building and some of the lots went into foreclosure. But a valiant group of property owners who owned lots at the bottom of the mountain have been able to make lemonade out of a bushel of lemons with a little help from SCLT. Here’s their story:

In 2013 SCLT purchased one of the lower lots in a bank foreclosure and thus began a collaborative effort to preserve as much of Chocolate Drop as possible while also protecting the property rights of the land owners.

With a visionary mindset and the help and support of the Polk County Community Foundation and these Chocolate Drop lot owners, SCLT acquired forty-six acres at the top of the mountain.

Then in February of this year, SCLT’s vision became a reality and deeded those forty-six acres to the Town of Columbus to establish a public nature park and greenway with access from Polk County High School. This area is protected from future development with a conservation easement held by SCLT.

As a result of the Chocolate Drop/SCLT partnership, the homeowners have designed a community with pedestrian corridors between every residential lot so that all residents and neighbors can walk from their home to the top of the mountain and around the entire subdivision.

SCLT salutes the endurance and generosity of these neighbors who have taken a frustrating and expensive experience and designed a community which benefirts us all. Sweet, sweet lemonade!

For more information on the history of Chocolate Drop, see https://www.tryondailybulletin.com/2013/02/11/chocolate-drop-discussion-stirs-debate/ 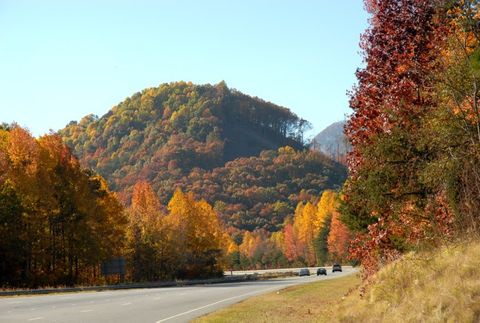 View of Chocolate Drop Mountain outside Columbus from 74. 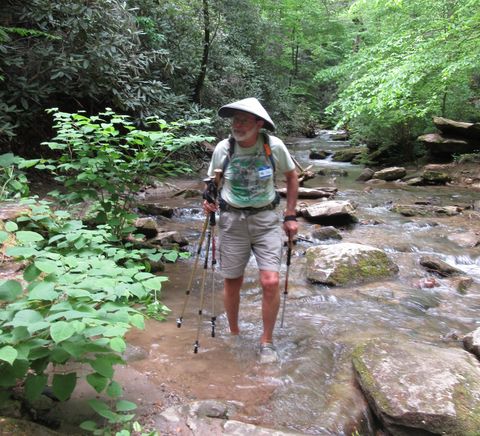 KEEPERS OF THE TRUST

The Saluda Community Land Trust was created to help preserve the rural character and open spaces of our community. There are many valued and dedicated persons who serve our community as Keepers of the Trust. Here’s one more!

Don Clapp has always been an outdoors kind of guy.

Growing up in Pennsylvania, he fondly remembers family outings of hiking, picnicking and swimming in state parks. Moving to the Charlotte area in the 1980’s, Don joined outdoor activity clubs where he enjoyed many weeklong outdoor trips of biking, skiing, paddling and hiking.

One of those groups was the Carolina Berg Wanderers—berg being the German word for mountain. An apt description for Don as one who delights in wandering in the mountains (or anywhere outdoors).

Some of those wanderings with like-minded folks introduced him to Saluda as they hiked mountain trails, paddled the local waters and enjoyed all that Saluda had to offer.

Following his retirement Don found his way back to Saluda where he settled in January 2012. Not long after he noticed a Saluda Community Land Trust posting about trail work which began his involvement with SCLT. It was also at this time that Don’s awareness and knowledge of environmental issues merged with his love and appreciation of the outdoors. He strongly believes that activities and opportunities to engage all persons, especially kids, with nature is critical to the earth’s future.

Don’s involvement with SCLT includes serving as a board member, past president and as an invasive plant fighter and member of trail crew. He also serves on the Saluda Planning Board, and along with his partner, Patty Martin, volunteers with the Pop-up Pantry.

An avid camper, Don continues to enjoy wandering while he experiences the wonders of life on Earth . . . and especially Saluda. 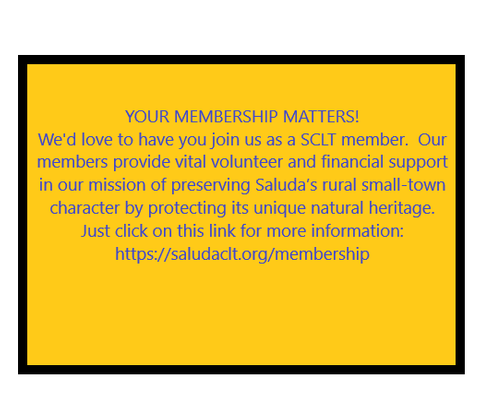 We'd love to have you join us as a SCLT member. Our members provide vital volunteer and financial support in our mission of preserving Saluda’s rural small-town character by protecting its unique natural heritage. Just click on this link for more information: https://saludaclt.org/membership

We appreciate our Business Partners 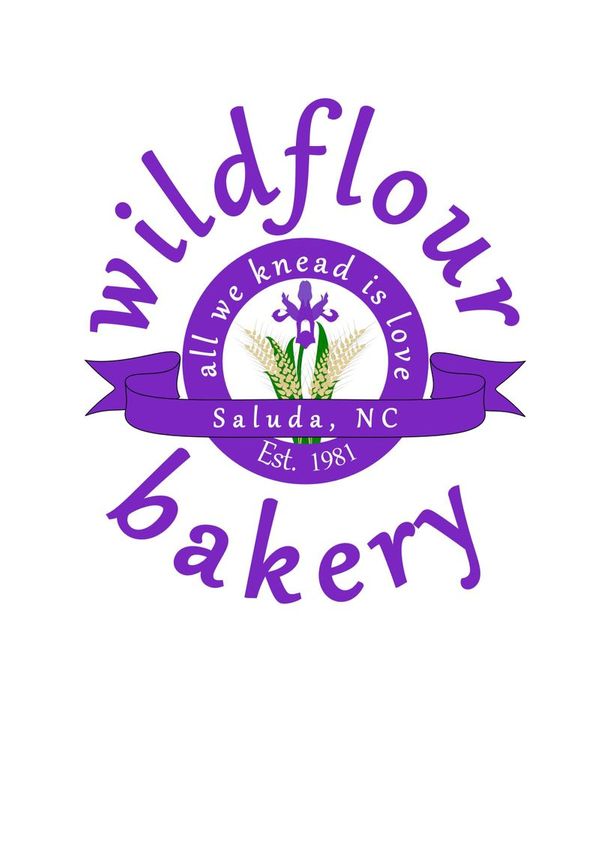 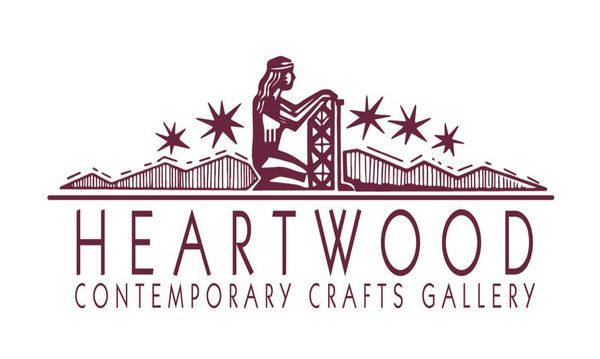 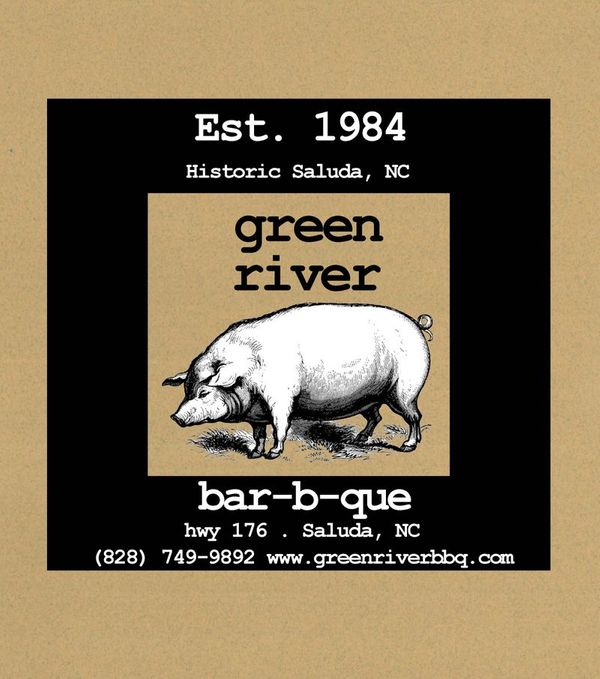 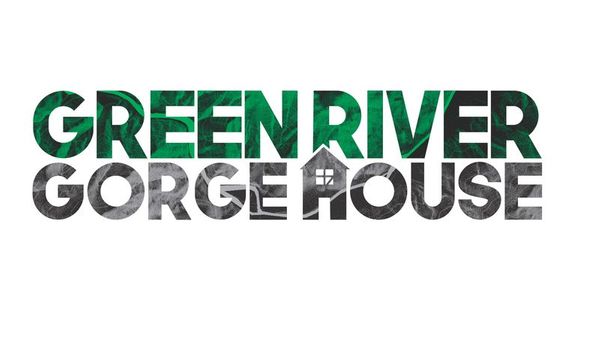 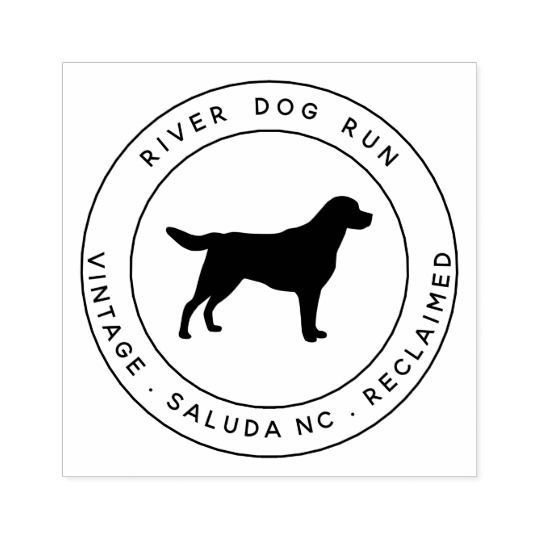 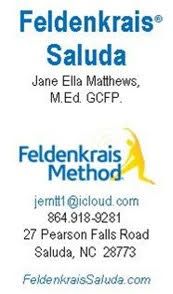 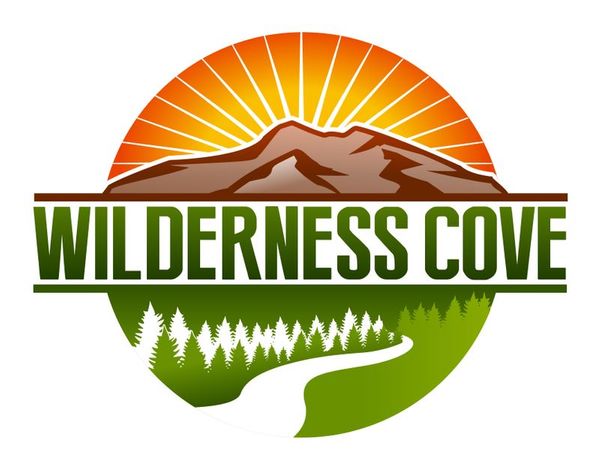 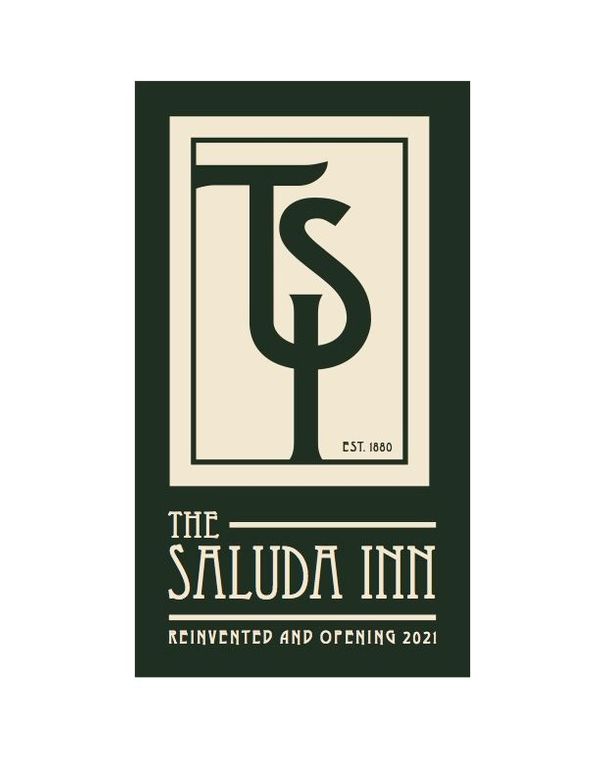 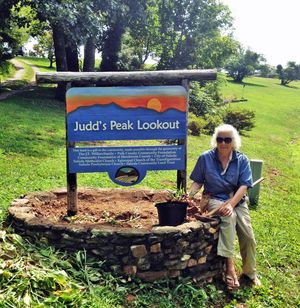 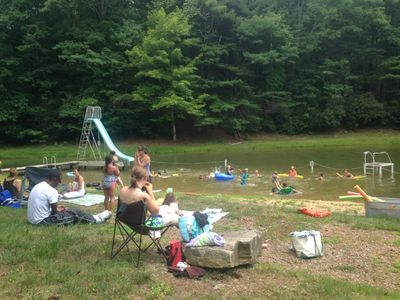 Please keep SCLT in mind when planning events in the coming year. SCLT has Twin Lakes and Judd’s Peak which are both amazing venues to reserve for birthdays, weddings, and other special events.

SCLT Board Meeting is scheduled for the first Wednesday of the month, December 1st, at 2:00.

When you shop at AmazonSmile, Amazon donates 0.5% of the purchase price to the Saluda Community Land Trust. Bookmark the link https://smile.amazon.com/ch/20-8869652 and help support SCLT every time you shop.

Please keep SCLT in mind when planning events in the coming year. SCLT has Twin Lakes and Judd’s Peak which are both amazing venues to reserve for birthdays, weddings, and other special events.

Please feel free to contact us about any of our projects by calling our office at 828-749-1560 and leaving a message. We will return your call promptly. Or send an email to info@saludaclt.org. We look forward to your comments and suggestions.

SCLT greatly appreciates the help from Polk County Community Foundation for the operating expenses for the year 2017.